…And Where To Watch

Turn your speakers up and get ready for a night jammed-packed with musical talent! The 2018 AMERICAN MUSIC AWARDS airs this Tuesday, Oct. 9 at 8 p.m. ET/ 5 p.m. PT on CTV and this year’s star-studded line-up definitely has people turning up the volume. A recent announcement from dick clark productions confirmed Canadian-born, multi-platinum superstar Shawn Mendes will perform with award-winning artist/DJ/producer Zedd in a first-time, red-hot AMA collaboration.  Mendes’ fun surprise at the 2018 iHEARTRADIO MMVA’s where he pranked his fans pretending to be Marshmello shows that anything can happen with him during a live broadcast, and fans are counting down his appearance on the 2018 AMERICAN MUSIC AWARDS. Mendes and Zedd join a list of stellar performers including an opening performance by Taylor Swift, and additional performances by Camila Cabelo, Carrie Underwood, Imagine Dragons, Mariah Carey, Post Malone, Ella Mai, and Twenty One Pilots. Special performances by soul and gospel legends Gladys Knight, Ledisi, Mary Mary, Donnie McClurkin, and CeCe Winans will honor the late queen of soul Aretha Franklin.  Additionally, Panic! At the Disco will pay tribute to the legendary British rock band, Queen with a special performance of one of Queen’s most popular songs, “Bohemian Rhapsody” written by the famous Freddie Mercury. Check out some accounts that are hyping up the hashtag, #AMAs: 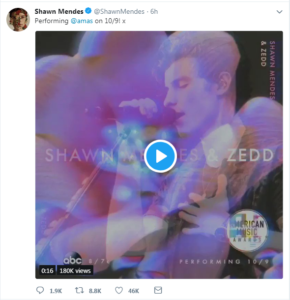 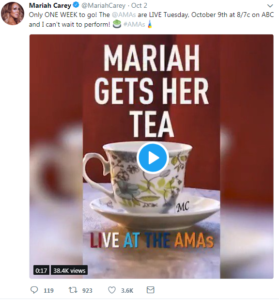 Mariah Carey counts down one week away from her live AMA performance. 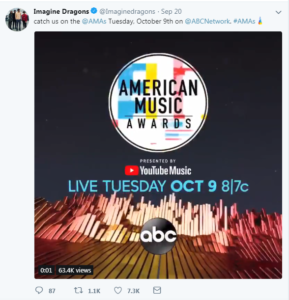 Imagine Dragons chimes in to let fans know they will be on the AMA stage Oct. 9. 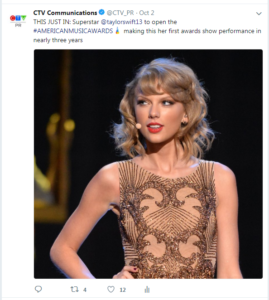 ETALK is set to bring some Canadian flare to the live awards show as the only Canadian outlet with exclusive broadcast coverage of the 2018 AMERICAN MUSIC AWARDS set to air on Wednesday, Oct. 10 at 7 p.m. ET on CTV.  ETALK will get exclusive access to all the red carpet action as well as backstage coverage from the “winner’s walk” with ETALK reporter, Chloe Wilde. CTV is this year’s official Canadian broadcaster for the 2018 AMERICAN MUSIC AWARDS which airs live on Tuesday, Oct. 9 at 8 p.m. ET/ 5 p.m. PT on CTV and CTV app. Viewers can also livestream on CTV.ca and CTV app and will also be made available on these digital platforms following the show. Follow @CTV_PR for all upcoming #AMERICANMUSICAWARD announcements. For night-of action @etalkctv will give followers access to the red carpet and backstage on the “winners walk”. Additionally, @AMAs and @CTV will also have all the broadcast details and highlights.